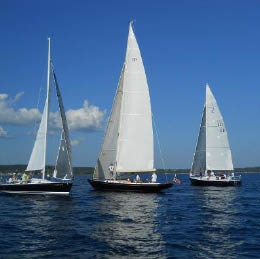 The weekend before July 4th, 2013 was a busy one in Ludington, as it played host to the Queen's Cup Sailing Race. This third longest sailboat race on the Great Lakes (after Chicago to Mackinac and Port Huron to Mackinac) began in Milwaukee and has alternated between Muskegon and South Haven as its Michigan destinations. The South Shore Yacht Club, which organized the event, was approached by the Ludington Yacht Club about bringing it to Ludington, the #1 Salmon port on the Great Lakes.

The Queen's Cup is one of the most renowned yachting races, where you'll see state-of-the-art carbon fiber sails and various items that allow these yachts to race at lightning speeds. This family-friendly event often features multiple generations within their crews. Racers come back year after year for the camaraderie and the thrill of the event. It is hoped that the Queen's Cup might use Ludington as their ending port every third year.


advertisement
This popular night time race brought more than 110 boats with crews of more than 1,000 people into port in the very early morning hours of June 29. Ludington residents helped welcome the sailors and got a look at the boats, made specifically for racing. Ludington's deep water harbor allows boats to dock, and many visitors spent the night in town, exploring Ludington's shops and dining at local restaurants. More than 175 volunteers helped out to guarantee a smooth-running event.

The year 2013 saw the 75th running of the Queen's Cup Sailing Race, and is one of the oldest known cups in world yachting. It is known as one of the most coveted trophies in racing. Ever-changing conditions on Lake Michigan make this event as unpredictable as the weather.

Also, read about sailing in the Harbor Springs area of Northern Michigan.

To subscribe to the Queen's Cup email newsletter, or for more information, visit this website: South Shore Yacht Club of Milwaukee, Wisconsin